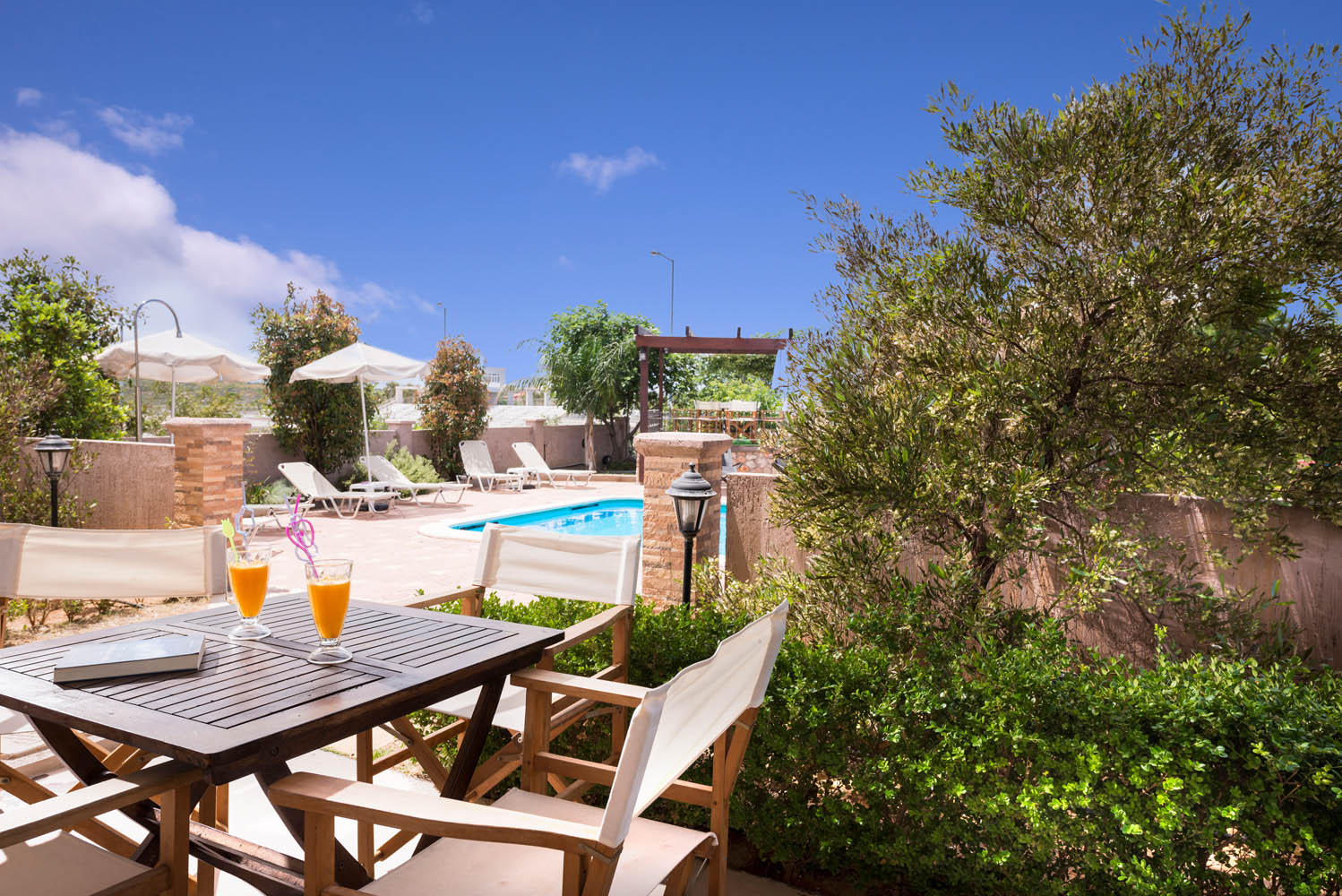 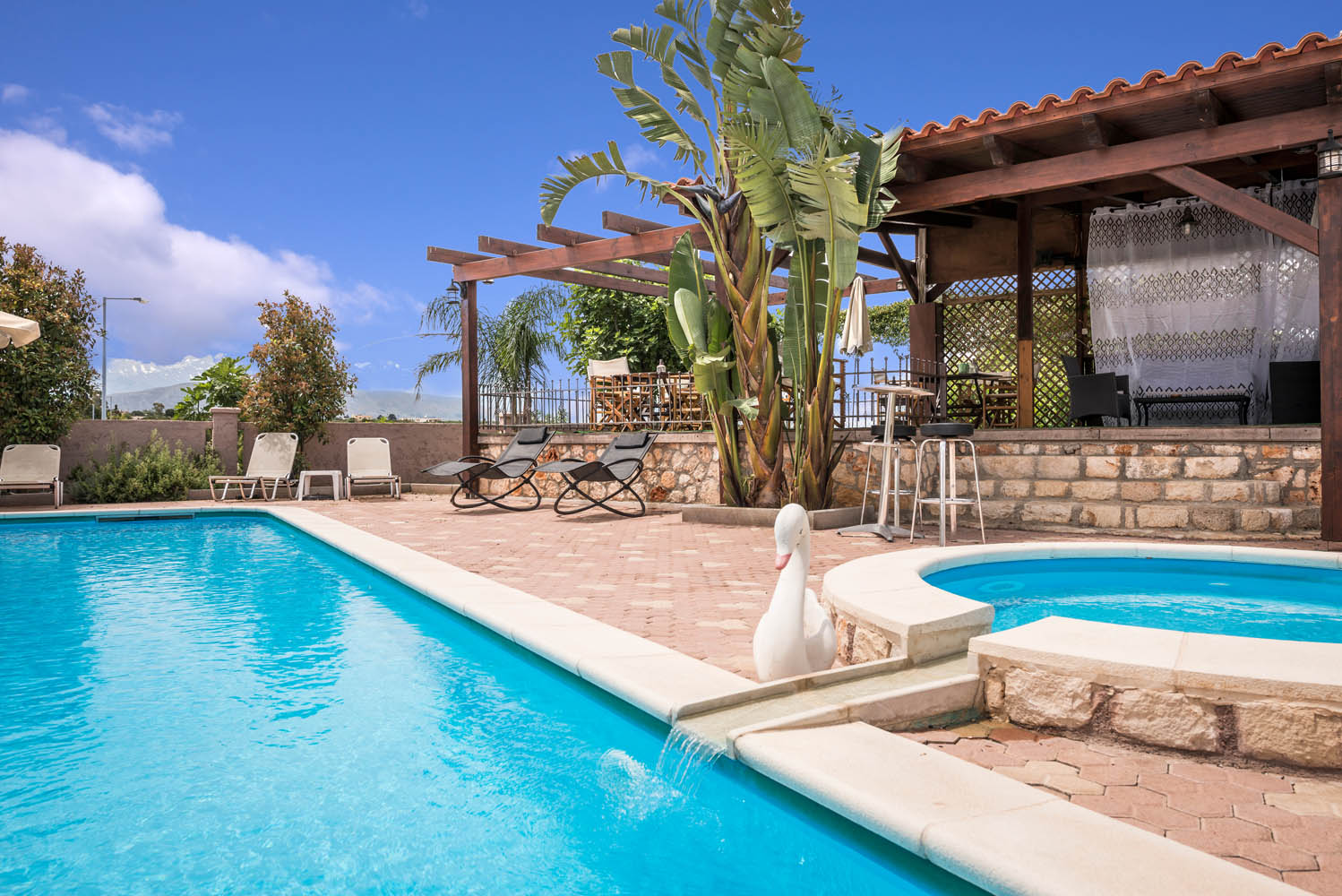 A Journey to your Senses

Areti Suites is located in the village of Kathiana, a small tranquil village in the center of Akrotiri Peninsula in West Crete.

Kathiana village is pretty close to Chania International Airport (only 2 minutes by car), the main airport in West Crete, and to the Port of Souda (only 10 minutes by car), the main port in West Crete. Akrotiri Peninsula is the transport hub of West Crete, and Kathiana village, located right in the center of the peninsula, enjoys a great advantage regarding quick access to the prime entry points in Chania region and West Crete.

Areti Suites, as it is located in a village, provides all the tranquility you need in your holidays, even in the middle of the high tourist season (July and August). At the same time, it is located just 11 kilometers from the center of Chania City, one of the most famous destinations in Europe. You can read more about the city and its wonderful sights in the chapter “Chania City – The Jewel of the Mediterranean Sea” below in this page.

Apart from the nearby magnificent Chania city, Akrotiri Peninsula itself has rare world-class sights, which more and more travellers in the know explore every year. Among them are the splendid beaches of Akrotiri (see the chapter “Akrotiri Beaches – A Heaven on Earth” below in this page) and the centuries old monasteries, true architectural gems of bygone eras (see the chapter “The Monasteries of Akrotiri – Keeping the Past Alive with Splendid Architectural Forms” below in this page).

Akrotiri Beaches – A Heaven on Earth

Possibly the most known beach in Akrotiri Peninsula is the marvelous Kalathas beach. It lies on the west part of the peninsula, right next to the homonymous village. Kalathas beach has fine sand and very clear, shallow water. Part of the charm of the beach is the small islet opposite the beach, where you can easily swim. The beach is organized, with umbrellas and sun beds, but if you prefer you can always sit on the sand, wherever you like. On the beach there is a nice café bar, which also offers snacks and light meals. Last but not least, if you travel in the high tourist season and you want more isolation, west of the main beach, after a rocky formation there, lies a second, secluded sandy beach, ready for you to enjoy!

A couple of kilometers north of Kalathas lies the village of Chorafakia. One kilometer to the north of the village is the village’s beach, Tersanas beach, which is located in the deepest point of a small picturesque cove. Tersanas beach has fine sand and crystal clear water. It is well organized and popular with families. Keep in mind that due to its small size, the beach can get quite crowded in weekends.

Stavros beach is located on the northwest edge of Akrotiri Peninsula, right next to the village of the same name. Stavros is a beach with spectacular natural formations, having a steep mountain with cliffs overlooking the beach. Stavros beach is known all over the world since the 60s, as the famous movie “Zorba the Greek” was filmed here, on the beach and on the adjoining mountain. Regarding the beach itself, there are two distinct beaches, one to the east and one to the north of the village. The first has fine white sand and is organized, and the second has sand with stones and is less organized. Both of these beaches have very clear water.

Marathi beach is located on the southeast of the peninsula, on the north side of the picturesque Souda Bay, the longest and most well-protected bay in the Mediterranean Sea. Marathi has two distinct beaches, on either side of the small harbour. Both of them have fine sand and shallow waters. Both beaches are popular with families, especially in weekends. Opposite Marathi beach, in a distance of about a kilometer, lies a big rocky islet, overlooking the magnificent Souda Bay.
Loutraki beach lies just a couple of kilometers southwest of Marathi beach. It is a sandy beach with crystal clear water, ideal for swimming. On the south part of the beach there is a known beach bar and tavern featuring sun beds and parasols on the grass in front of its facilities. The place can get quite crowded in the weekends, as the beach bar is very popular, especially between young people. 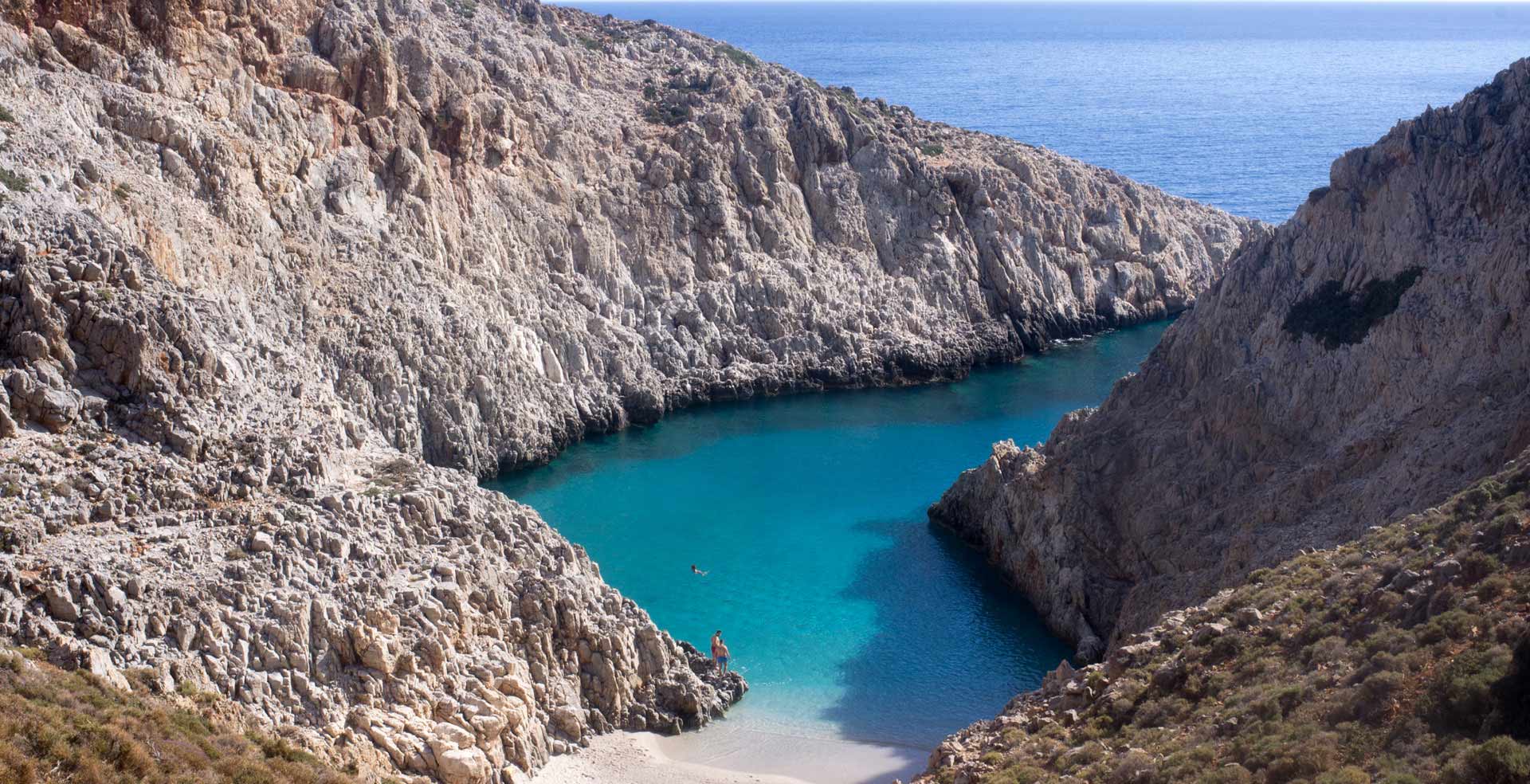 Seitan Limani beach is located on the east of Akrotiri peninsula, about 2 kilometers east of Chordaki village. In Greek the name literally means “Satan’s harbour”, due to the landscape of steep rocky cliffs overlooking the sea. However, in the middle of all this wild scenery, a splendid beach is formed, well protected into an oblong rocky bay. The beach has both sand and pebbles and the clearness of its water is outstanding. Seitan Limani beach is well protected from the winds, no matter their direction. The beach, which is one of the most beautiful “secret” beaches in the Chania area, is not organized and is set amongst a natural landscape of unique beauty. Therefore, you should take every care to keep it as beautiful and clean as it is today.

In a distance of only 7 kilometers north of Kathiana and Areti Suites, lies one of the most known monasteries in Crete, Agia Triada Tzangarolon monastery. The monastery was founded in the 17th century from two Venetian monks – and brothers – Jeremiah and Laurentio Giancarolo (the name “Tzangarolon” comes from their name, “Giancarolo”). The two brothers renovated the older monastery that stood here, with the financial help of wealthy families living in the area, and transformed it into an architectural masterpiece– and one of the most beautiful monasteries of the Venetian era that are in use today. 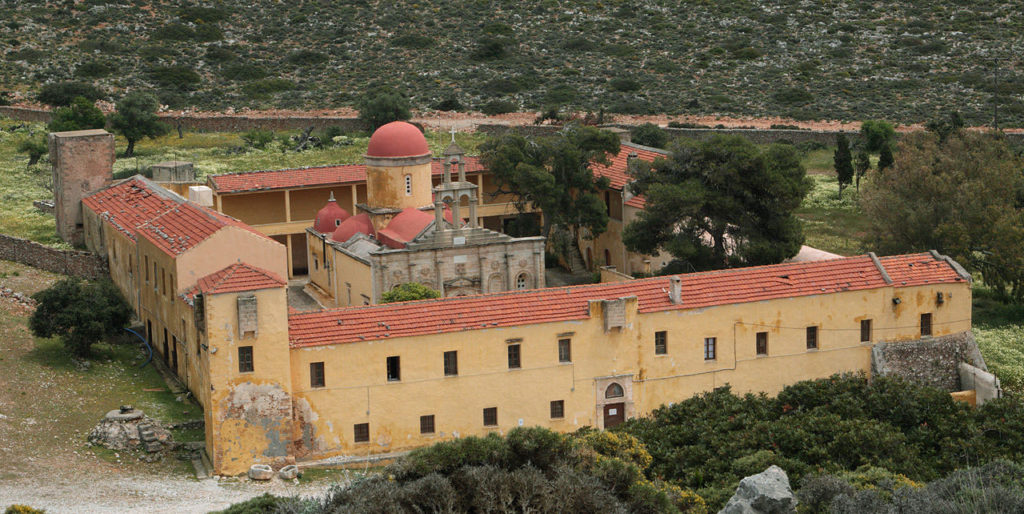 About 5 km north of Agia Triada Tzangarolon, and close to the northest point of the peninsula, lies the second renowned monastery of Akrotiri, the Gouvernetou monastery. The road leading to the monastery is paved – and relatively narrow – and passes through a small gorge. Gouvernetou monastery is a large square building around a central courtyard, where the church of Virgin Mary stands. The monastery is fortified, due to the pirate raids of past centuries, and dates back to the 16th century. The surrounding area around the monastery is full of local nature and is excellent for hiking – but you should avoid the hot hours of noon, as there are not many trees around to provide shade. It is a good idea to avoid visiting the monastery at noon, too, as it is often closed for visitors due to the monks resting. After the monastery, a well-defined footpath towards the north leads to the known “Arkoudospilios” cave, or “Bear cave” in English. The cave has taken its name from a rocky formation that resembles a bear – according to the legend, a bear lying here was turned to stone. If we continue on the footpath towards the north, we soon find the abandoned Katholiko monastery, with the known church and cave of St John the Hermit, next to the small harbour. Keep in mind that the monks of the Gouvernetou monastery do not allow visitors to swim in the harbour.

Chania City – The Jewel of the Mediterranean Sea

Although there are literally thousands of articles and web pages dedicated to the magnificent Chania city and its sights, it is always helpful to mention some things about this great destination. Chania city is considered by many visitors the most beautiful city not only in Crete, but in the whole of Greece, as well.

First of all, there is the old Venetian Harbour, one of the most beautiful harbours in the Mediterranean, and the most known Venetian harbour after the one in Venice itself. On its western tip, overlooking the harbour, lies Firkas Fortress, an impressive Venetian building that during the times of the Ottoman occupation used to be a prison for the Greek rebels who fought for the liberation of the island. Today Firkas Fortress houses the Naval Museum of Chania.

On the east edge of the harbour, there is the Arabian lighthouse, named after the Egyptian workers that undertook its restoration in the Ottoman years. The lighthouse has been recently restored to its previous glory. Just to the east of the lighthouse we see the Old Sea Wall, which protected the dozens of ships that used to be here in the harbour’s heyday in the Venetian era.

Opposite the Old Sea Walls, in the direction of the city, there are the big Venetian Neoria (the Venetian dockyards). These large buildings where later used as huge warehouses that helped the city survive through numerous sieges from the Ottomans and the Saracen pirates. Today, the biggest of them, the Great Arsenali, has been expertly restored and houses the Center of Mediterranean Architecture, a known architectural organization of the European Union.

Just behind the Venetian harbour, you can find the Old Town of Chania, with its beautiful buildings, many of them dating back to the Venetian and to the Ottoman times. Inside the roads and the picturesque alleys of the old town, you will find an unlimited variety of shops, cafes and taverns. Here is the perfect place to taste the famous Cretan cuisine, and the distinctive local spirit, “tsikoudia” (also called “raki”).

If you want to discover the recent history of Chania city, which has left its mark in Greek politics, we recommend you also visit the aristocratic neighborhood of Halepa. In Halepa used to be the mansions and houses of the local and foreign politicians at the time when Crete was in the forefront of the political activity in Southeast Europe. Nowadays there are some remnants of the great past of this quarter of the city, including the historic house of Eleftherios Venizelos. Eleftherios Venizelos is one of the prominent politicians in the modern history (1850 – present) of Greece. Serving for many years as prime minister of Greece, he managed to steer the country in the right direction through turbulent times like the Greco-Turkish War and the liberation of Crete, World War I and the Balkan Wars.

Today, in the outskirts of Chania city, east of Halepa and towards the direction of the Akrotiri Peninsula, you can find the Venizelos Graves, a place of great historical importance for the Greek people. Next to the grave of Eleftherios Venizelos is the grave of his son Sophocles, who was also a famous politician in his era. From the splendid gardens and the small church in the surrounding area you can enjoy what is possibly the best panoramic view of the city of Chania and the coast of Northwest Crete.